We live in a highly globalised and connected world. Worldwide shipping and communication networks have intensified and become less costly over time too, meaning that it is now normal for us to do something like purchase an item that was produced in another country while out shopping.

Evidence of international and intercultural sharing of ideas is omnipresent within our daily lives – we see, hear, taste, or otherwise experience these things pretty much constantly.

While early systems like the famous Eurasian Silk Road are often cited as early pre-industrial drivers of globalisation, it was not until the eighteenth and nineteenth centuries that our world became truly interconnected.

It was at the end of the eighteenth century that one of the most iconic styles of medium-to-high end ceramics was designed and first shipped out, and which can still be found in many homes and op shops today: the Willow pattern.

There are no accessible records of the true date that the Willow pattern was first invented, but we do know that it was created during the 1780s by Thomas Minton.

Minton worked at the Caughley Salopian China Manufactory, under the direction of a Thomas Turner, during the 1780s, and left the company in 1875 in order to produce engravings for Josiah Spode.

Minton, and yet another man named Thomas, Thomas  Lucas, are both credited with creating elements of the Willow pattern throughout that decade.  It is alleged that the first proper Willow Pattern ceramics were produced by the Spode factory around 1790.

The Willow Pattern depicts a specific scene that ties into a popular story, which was created to promote sales. The fable, which presents itself as a somewhat Orientalist Western interpretation of life in China, focuses on the daughter of a wealthy bureaucrat. She falls in love with her father’s accountant, and they run away together to avoid her impending arranged marriage. The couple escape to a secluded island using a boat left by the wealthy Duke that the daughter was arranged to marry, and they live there peacefully for a time. Eventually, the bureaucrat catches them and they are both tragically put to death. The gods are moved by the suffering of the lovers, so they are transformed into a pair of doves.

Unsurprisingly, the Willow Pattern caught on fast, as other companies’ factories began producing china with the iconic blue transfer printed design. These ceramics were shipped worldwide, to places such as the Americas, and down here to Oceania. Willow Pattern ceramics are abundant here in New Zealand, and can be found almost anywhere – University archaeology labs, museums, shops, homes, and so on – the examples shown on this page are from the Ashburton Museum collection.

The Willow Pattern not only manifests in ceramic designs, however. Ever since the pattern became popular, garden enthusiasts the world over, including within New Zealand, have taken it upon themselves to recreate the iconic Willow scene in real life, in varying levels of scale.

Our own semi-local example (at least on a global scale), was created in the 1960s, and comes from King Edward Park in Hawera, Taranaki. James Beattie describes the inception of the garden in a 2016 journal article for ‘Studies in the History of Gardens & Designed Landscapes.’ The park’s superintendent at the time, Harry Beveridge, strove to transform one particular section of the park, which was becoming dilapidated and expensive to repair. He aimed to produce a spectacular rendition of the garden scene depicted in the Willow Pattern.

Beveridge’s creation surely surpassed all expectations, as the final product of his meticulous planning was a spectacular sight, having incorporated a great variety of flora, and both natural and man-made rock features. From 1968 until 2014, the Willow Pattern garden at King Edward Park was a major tourist attraction in Hawera, which highlights the cultural importance of the pattern for locals and tourists.

Would We Be Willing?

One question has stuck in my mind after learning of the Hawera Willow garden: could we do it here in Ashburton? Although the meaning of the pattern is most likely lost on most people today, if you look closely, we are sure you can find influences of this style all around you. 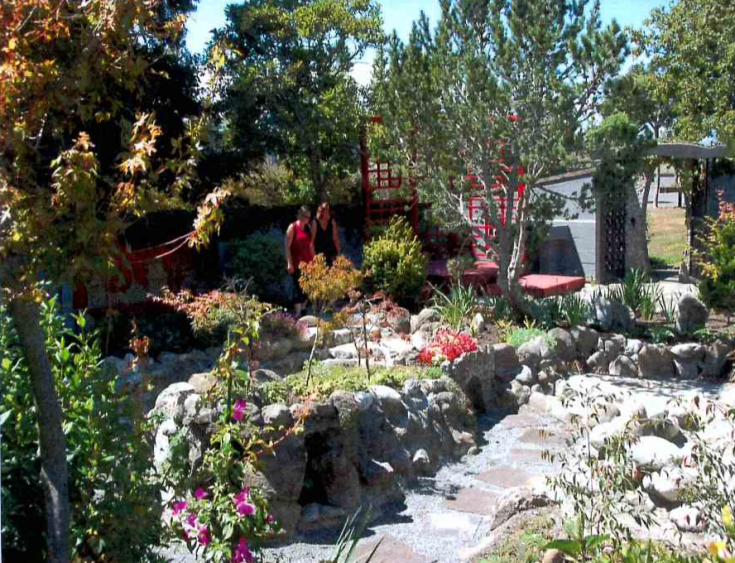 1) An example of a meat plate, transfer printed with a version of the Willow pattern. Brought to New Zealand by the Wilkins family.

3) A saucer depicting the Willow pattern, produced in 1892 – likely a very early one.

4) Photo of the Willow Pattern garden at King Edward Park when it was still open. Image courtesy of the South Taranaki District Council.