Friday November 30, 1984 at the Hotel Ashburton turned out to be an eventful moment in New Zealand’s music history. The band Netherworld Dancing Toys was here for a live gig.

Taking a break shortly after set up and sound check, band member Nick Sampson was working on a new song.

What he would go on to pen was the chorus for the iconic New Zealand anthem, For Today.

If you’ve spent time any listening to Kiwi music since the song’s release in 1985, then chances are you’ve sung along to the immortal music and words of, “For today, I remember your smile…”

The band, with their soulful Motown and ska influences and catchy brass section were a perfect fit for the long summer days and huge rambling pubs of the 1980s band circuit.

Venues like the ‘Flash Ash’ (or Hot Ash) as it was known, attracted huge crowds into their modern facilities, and had the local punters rocking to a new generation of home grown musicians.

Hailing from Dunedin, Netherworld Dancing Toys were beating the heat of summer that year, touring the country during November and early December, playing to packed crowds at venues across the country. Ashburton would remain memorable for that perfect moment when lines, music and sentiment came together.

The band’s unusual name was inspired by the famous Roxy Music song Spin Me Round, “A nether world dancing toy, I’m wired for sound…”

Like many young New Zealand bands, Netherworld Dancing Toys went through a series of members as people came and went, with other commitments. The group formed at the University of Otago, with core band members including Malcolm Black on guitar and vocals, Graham Cockroft on bass and drummer Brent Alexander, alongside Sampson, also playing guitar and singing.

Like many university students, Sampson spent his summer holidays working to save money to pay bills over the student year ahead. He’d started For Today while away from the band, working at the Waitara Freezing Works in Taranaki.

When the band regrouped in February for the University Orientation tour in early 1985, Sampson worked with Black who helped re-write the verse, melody and lyrics.

About that time, the full time horn section departed and they brought in the Newton Hoons from Auckland, who suggested the band try out a backing vocal duo. Enter, Kim Willoughby and a 17 year old Annie Crummer. With Crummer and Willoughby’s memorable vocals as contribution, the band worked up the new song and debuted it on the Orientation tour. 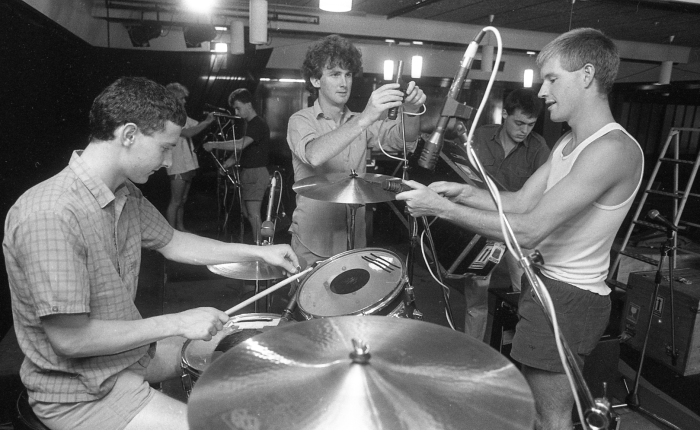 Before they knew it, Netherworld Dancing Toys had a hit to their name. In 1985, For Today reached number three in the singles chart. The band would go on win five categories at the 1985 New Zealand Music Awards. Black and Sampson also won the 1985 APRA Silver Scroll for their work on For Today.

Like many iconic sounds of New Zealand music history, the catchy tune and lyrics were soon revisited and loved by a new generation.

In the early 2000s, For Today became the aural signature of a New Zealand Post advertisement, and also featured on a safe driving campaign, as well as in 2015 for the Pak n Save supermarket’s 30 year celebrations.

For Today also became a defining tune of New Zealand Pasifika comedy, when it was featured on the soundtrack of the film Sione’s Wedding in 2006.

Today the band members have gone on to varied careers, and keep a keen interest in New Zealand’s current music.

We offer our condolences to the band, friends and family for the recent passing of the band’s lead singer Malcolm Black, who passed away in May 2019.

Next time you’re left humming (or singing) the tune – we hope you enjoy For Today as a true local classic.