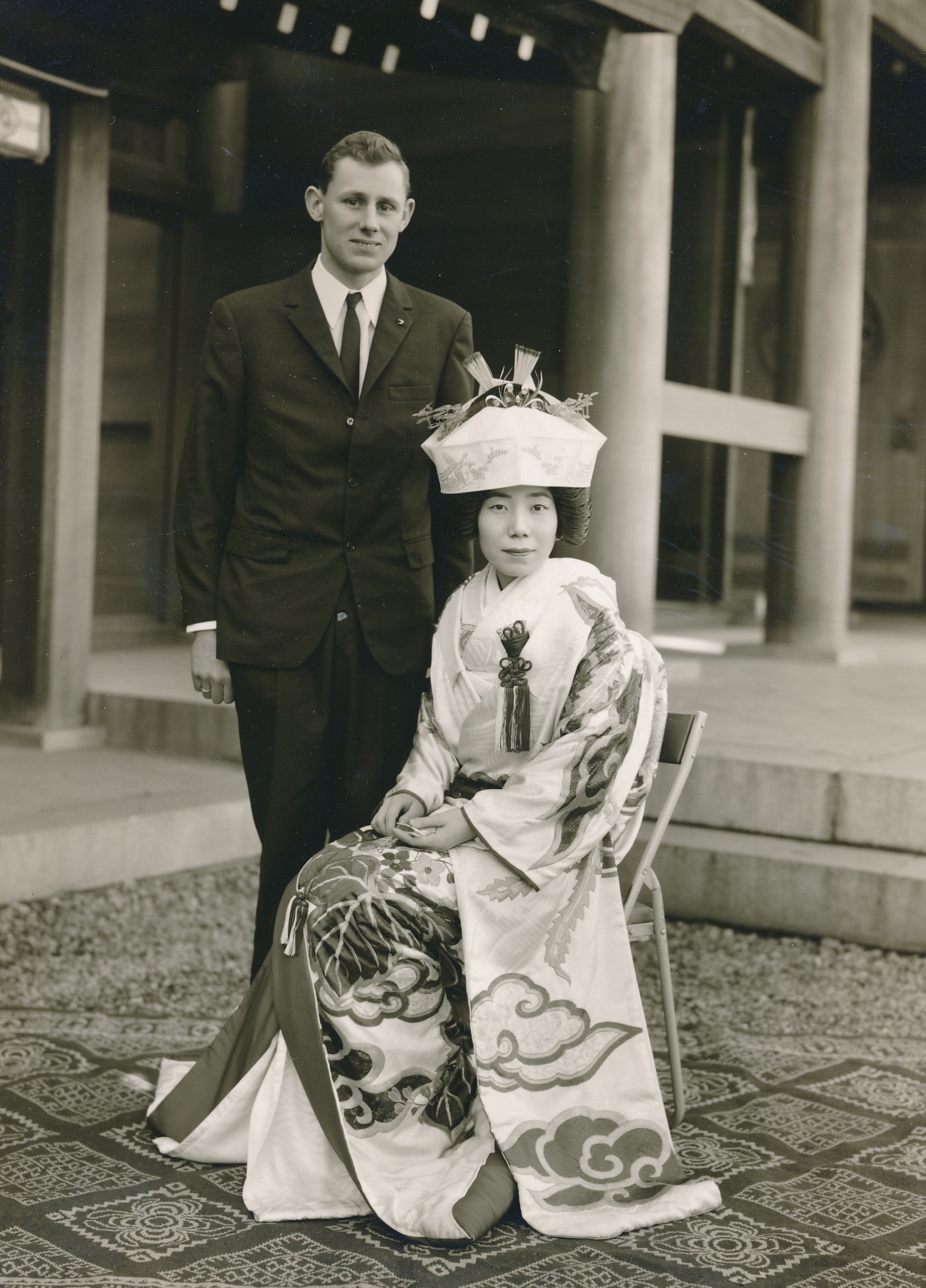 Last year we opened The Spirit of Budo: The History of Japan’s Martial Arts. With the exhibition off to a great start and having proved popular with visitors, we turned our attention to looking for Japanese connections in the Ashburton Museum collection.

A great story that we discovered was through items belonging to the Breeze Collection, held at Ashburton Museum.

Leon Breeze and his wife and Elizabeth Breeze (nee Mee) were involved in many community activities and organisations, including this very museum. In fact, they donated many Japanese related items to the collection.

Born in Wellington, Elizabeth was a governess and later a nurse. She met her husband Leon in Blenheim, while he was training to be a pilot. They married in Nelson and their first child, Gerald was born there in 1942.

About 1977 their son Gerald married a Japanese woman, Chieko Yamagata, in a traditional Shinto ceremony. Having family in Japan inspired Elizabeth to learn more about the culture, which she became very passionate about. She learnt the language and was a member of the New Zealand – Japanese Society.

Elizabeth regularly gave talks and demonstrations to local groups, especially kindergartens, about Japan and Japanese culture. Some of her treasures later made their way to the museum, becoming a reminder of local connections from Japan to Ashburton.

One of Elizabeth’s treasures is mobile of a thousand origami paper cranes. It is thought that this may have been a wedding gift for Gerald and Chieko.

The crane is a special creature in Japanese culture and is said to live for a thousand years. A thousand origami cranes tied together with string is a wish for good luck and a common gift for special occasions, such as birthdays and weddings.

Cranes are also a common motif on wedding kimono, and also featured on Chieko’s wedding headdress you can see the cranes.

Folding a thousand paper cranes is very time consuming and was once very costly. Buddhist monks brought paper to Japan from China and the earliest examples, dating from the 6th century are connected to religious and other highly important ceremonies as paper was so expensive. Later it became a favourite pastime for all members of the community, including children.

Other items from Elizabeth’s collection include Kokeshi dolls, which are simple toys for young children. Also a green metal pendant, thought to be a good luck symbol, possibly connected with Omamori (good luck charms) which are often sold at Shinto shrines.

In the collection there are also paper figure bookmarks, a ceramic saki bowl and cups, and a lidded bowl. There are also lidded boxes to carry food, made in the form of a kokeshi doll.

Many items feature a cherry blossom motif, which is associated with renewal and beginnings, due the appearance of the blossom in spring.

In civilian life, Leon was a lamb buyer and as his father worked at the freezing works in Fairton, where Leon also worked.

The Breezes were well known throughout the district. Leon was a keen scouter and was district commissioner for many years. He was awarded the silver tiki, the highest scouting award in New Zealand for his services to scouting. He was also instrumental in obtaining the land now known as Mani o roto.

Both Leon and Elizabeth were involved in the establishing the Allenton Kindergarten.

Elizabeth was heavily involved in repertory, the kindergarten, Forest and Bird and the Caravan Club.