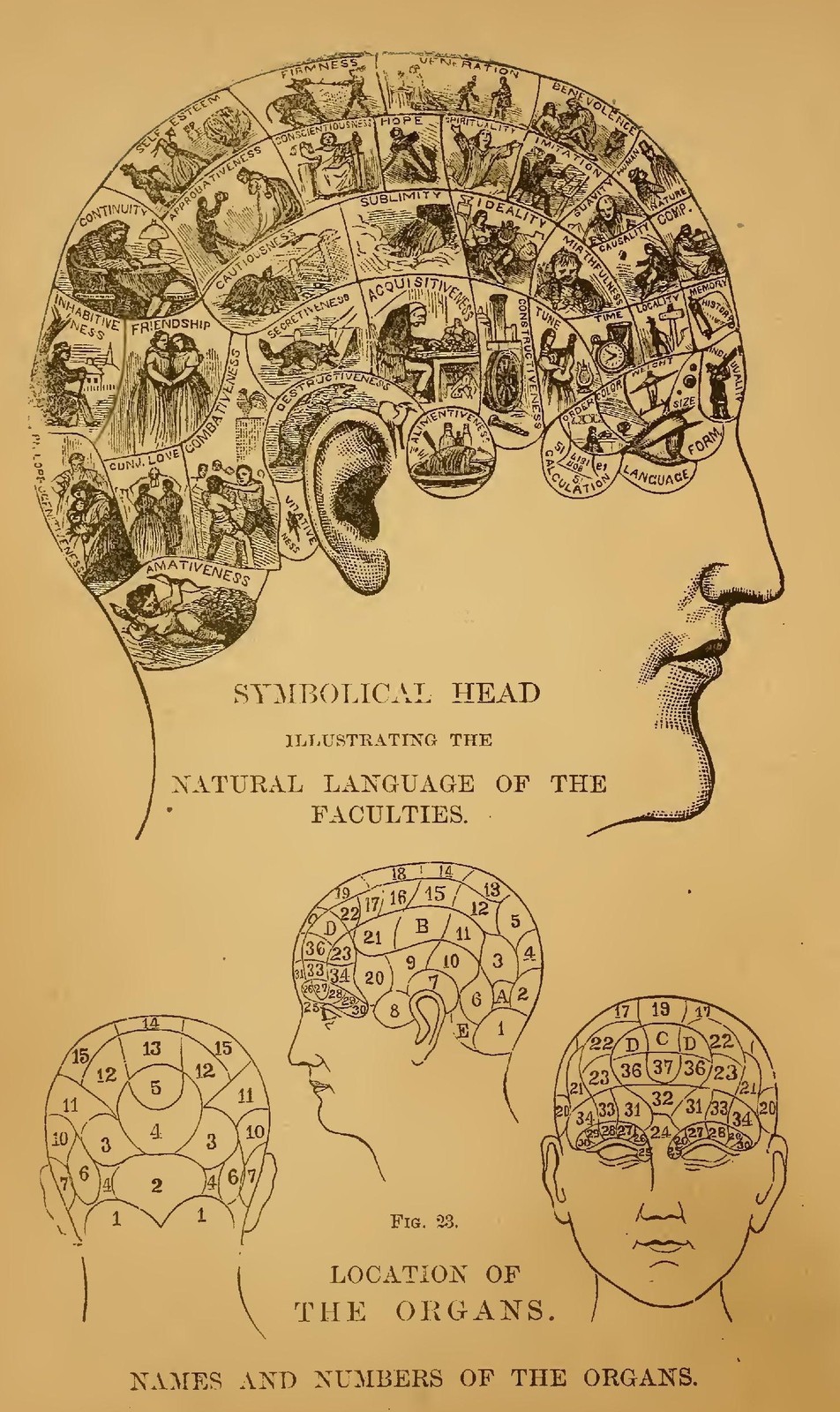 Many scientific practices or areas of study that were once considered progressive or novel are now considered pseudoscience and quackery – phrenology included. You may see phrenology head models and head charts occasionally in odd shops, making the notion of the practice seem a bit “hipster”, but phrenology was as dubious as it was intriguing. For a short time phrenology also found popularity in Ashburton.

Phrenology was invented by German physician Franz Joseph Gall, in 1796. Phrenology assumes that the brain is made up of modules, often called “organs”, which control or represent different personality traits, attitudes, behaviours, and demeanours. For example, the size of the part of the skull just above your ear denotes your “destructiveness”.

Phrenology was, as you can imagine, immensely popular with both the curious general public and academics during the nineteenth century. The Edinburgh Phrenological Society was established in Edinburgh in 1820, which prompted other societies to form across the British Isles, as the practice spread worldwide. Even Thomas Edison praised phrenology! 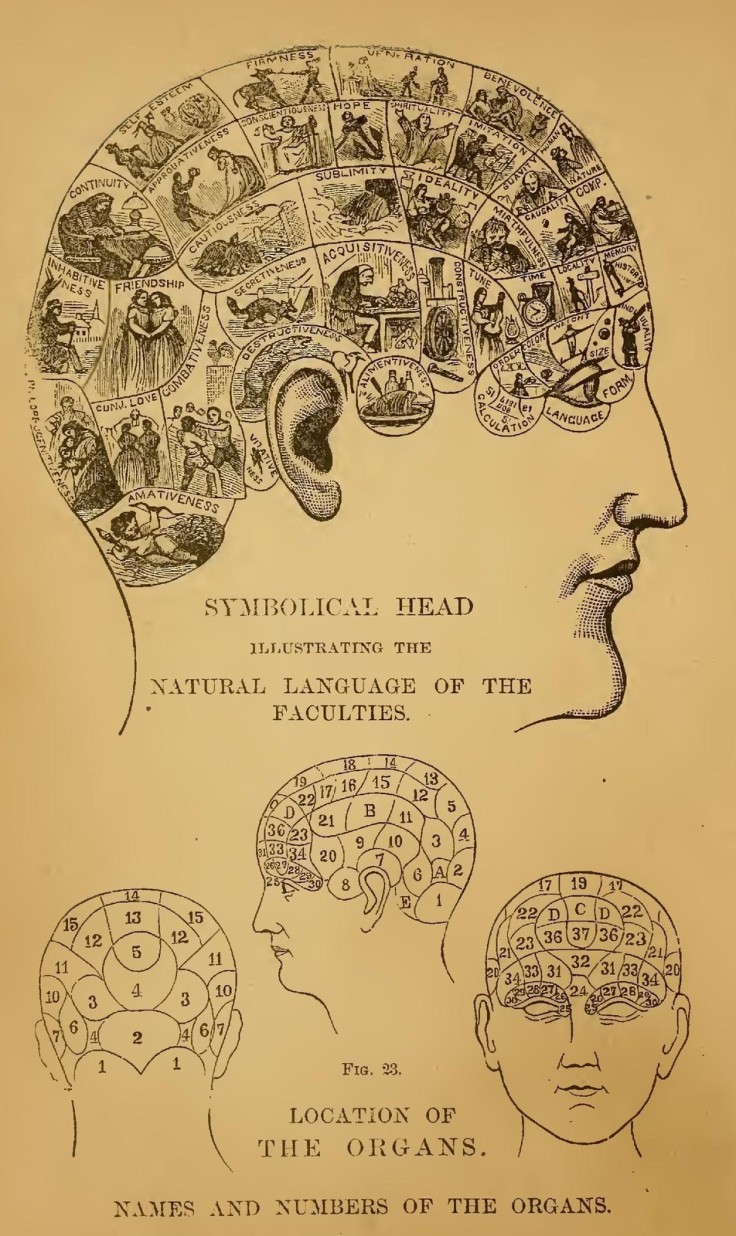 Books and pamphlets were of great import regarding the spread of phrenology. Some examples of such pamphlets written by OS Fowler from New York include “LOVE AND PARENTAGE, applied to the Improvement of Offspring” for 1s 6d, “MATERNITY; or, the Bearing and Nursing of Children” for 5s, and “HEREDITARY DESCENT: its Laws and Facts applied to Human Improvement” for 5s. Phrenology was a business at the core, and was clearly intended to be a means through which one could adjust their life, as well as being a form of entertainment.

Unfortunately, phrenology’s purposes did not stop at novelty or psychoanalysis – it was also a tool through which racism and ableism were justified and reinforced in nineteenth century society. Phrenology ties in heavily with the concept of scientific racism, whereby European academics believed that different races or ethnic groups varied physically, and were organised into a hierarchy that reinforced white supremacy.

Medo on the Mind

A collection of documents recently came into the collection of Ashburton Museum, which, at first glance, appeared to be mostly unassuming financial dockets and scribbles. One set of papers stood out upon further inspection – the phrenology reports of a Mr. and Mrs. Watson, dated around 1884 judging by the date on the torn envelope they arrived in. The name of a Professor Lio Medo dominates the front page of each report – making him clearly responsible for these “Cerebral Developments.”

The reports each include a listed chart of the subject’s organ sizes and purposes, as well as a few pages of notes and descriptions outlining the subject’s personality. These reports are extremely thorough and are based on a printed or typed template, which suggests that this Lio Medo must have been both an intelligent and wealthy man. After some digging, it can be said that he was perhaps the former to an extent, as well as a bit of an oddball character.

Documentary evidence demonstrates that phrenology was popular in New Zealand. Newspapers describe phrenologists giving lectures and personality reports at halls, schools, and offices across the country, including within the Ashburton District.

“Professor Lio Medo” pops up in nearly every newspaper across the country during the 1880s. The Auckland Star described him in March 1886 as being “of tall stature, robust figure, and intellectual appearance. His style of lecturing is easy and natural, and he has both fluency of speech and graphic descriptive power.” According to the same article, he was not the kind of man who liked to announce his arrival in places. Instead, he preferred to quietly observe and study people following a more quiet arrival. According to the New Zealand Herald in 1881, Lio Medo was an American of African descent. These vivid descriptions give us a good mental picture of this interesting character.

Lio Medo travelled across New Zealand delivering lectures and giving phrenological readings, giving either public “entertainments” or private consultations. Medo often played a game with his audience based around who had the “most intelligent head”. He also read passages from Shakespeare on stage, and even had the Ashburton Brass Band perform during his intermissions.

Lio held many such lectures here in Ashburton, eventually opening an office in the Saunders Building on East Street in early 1883. A newspaper advert announcing this, lists the prices for written descriptive charts, which confirms that the phrenological reports that we were given must be from the early-to-mid 1880s and were written in Ashburton.

Lio Medo may not have been what he seemed however – here is a passage from the Guardian, January 1892, which may call Medo’s legitimacy into question:

“An inquest was held on the body of a Maori who had died while under the treatment of a colored man named Lio Medo, who is well known over the colony. Medo was subjected to a long cross-examination to show that under another name he served various terms of imprisonment, but he denied everything. The medical evidence showed that the treatment had been for a wrong complaint, but no skill could have saved the patient, and the verdict was death from natural causes.”

It’s fortunate that Mr and Mrs Watson survived their experience of phenology with only a good story to tell and the written reminder now held at Ashburton Museum.