As we approach Armistice Day, we may reflect on how such war focussed events as Armistice and ANZAC day were commemorated. It is interesting to note that some aspects we think of as traditional were not originally associated with such events.

Wreaths, perhaps the most common sight, were not present at the first commemorations. Generally, a wreath represents a personal funeral tribute to an individual and usually is placed at the graveside. Public commemorations at ANZAC and Armistice were not funerals. Parade and services were impersonal, even if evoking personal memories. The utilitarian Ashburton Domain pavilion, the venue for the afternoon ANZAC service, was scarcely appropriate for the placing of wreaths.

In mid-1917 the Government inquired whether the country’s local authorities might provide burial plots without cost for non-discharged returned servicemen. The Ashburton Borough Council agreed to set aside a block of land in the cemetery in July 1917. By February 1919 there was concrete curbing on the site and paths laid out. The Soldiers’ plot gave Ashburton an appropriate area for tributes of remembrance, although not a conventional memorial, of course – that came with the Cenotaph in Baring Square West a decade later.

It did, however, provide a civic focus, accessible and relevant to all affected by loss in the “Great War”. For example, in 1920 the Ashburton County War Relief Association forwarded a wreath to the RSA to be carried in the parade to the Domain and subsequently be taken to the Soldiers’ plot. 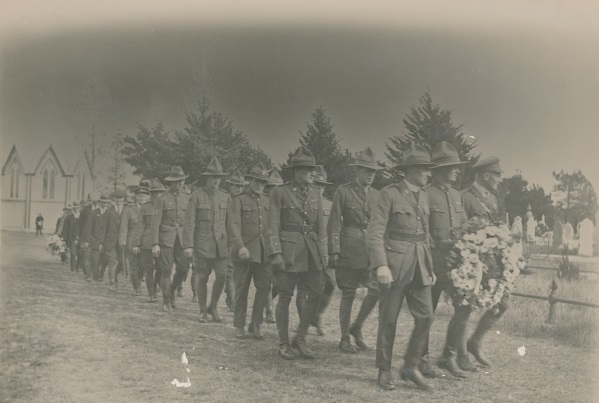 In 1921 Mt Somers vicar, and Former Chaplain to NZ forces in France, Rev. A. J. Petrie conducted Ashburton’s first commemorative service at the Soldiers’ plot. The Guardian called it “brief, but impressive, a simple ANZAC day tribute to those Ashburton soldiers whose graves are in County soil”. There was no street parade; returned soldiers and the public simply were invited to assemble. But there were wreaths – a large number, apparently. These came from the Borough Council, the RSA, the Soldiers’ Club, Technical School, local primary schools and the Boy Scouts. They were placed on the graves by the children, adding to the floral tributes put there by relatives and friends.

It was as if a flood-gate had opened and the wreath laying tradition on Ashburton’s ANZAC Days was established. This has continued unbroken at the cemetery and flowers now colour other war memorials that have been erected in the town.

Similarly, ANZAC poppies – those representations of the bright red flowers of the bloodied fields of Flanders were also absent from the earliest ANZAC Day commemorations. These post-war symbols of remembrance appeared in New Zealand only in 1922 after agreement to assist the French Children’s League. That charitable enterprise marketed internationally the cloth flowers made by war-widows and orphans in northern France who benefitted from the proceeds. Part of the money from their sale in New Zealand went to that cause, the remainder to the relief of unemployed soldiers. 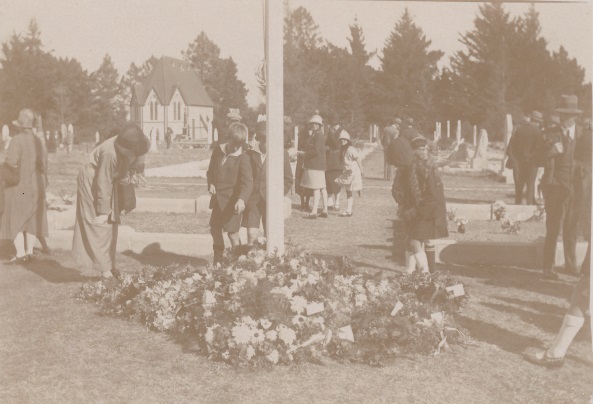 There was great enthusiasm for the poppies. Street sales on the days immediately preceding ANZAC day, the so-called “Poppy Day”, spread throughout the country. Everywhere remarkable sums were raised and phenomenal numbers of poppies sold with some towns running out of supplies. In that first year Ashburton raised £62 (about $6000 today).

ANZAC, and later Armistice, Day gained another familiar sight. Poppies worn on lapels of jackets, coats, uniforms – the one symbol of remembrance that all might carry and many might place, without ceremony, on local memorials. An everyman’s tribute and wreath.