Just over 100 years ago, an article written by Clara Lill was published in the Ashburton Guardian to mark the 25th anniversary of women’s suffrage in new Zealand.

Clara signed the petition in 1893 that successfully led to all women in New Zealand being given the right to vote – the first country in the world to do so.

Born in Norfolk, England, in 1857, Clara emigrated with her family in 1875. They settled in Ashburton where Clara met and married William Lill, who farmed at Willowby.

Always active in the community, Clara was President of the Ashburton branch of the Women’s Christian Temperance Union for 21 years. Her ability to put her views in a calm, clear and interesting manner show why she was an effective advocate for the causes she believed in. Clara died in 1932.

On September 19, 1893, the women of New Zealand were enfranchised, given the universal suffrage, or the right of every women over the age of twenty-one years, to vote at Parliamentary elections. Great evils were predicted by the opponents of women’s suffrage. It was said that public credit would be shaken; women would neglect their homes and children, stockings and socks would not be darned, and it would sow dissension between husbands and wives. Has this been so? No. After twenty-five years of political freedom we see none of these prophecies fulfilled. The first noticeable effect of women at the polling-booth was to stamp out the old-time election rowdyism. The closing of hotels on polling day was the direct result of the enfranchisement of women. It was said we would not use the vote. The very first election proved this untrue, for eighty-two and half per cent of the women recorded their vote. Every woman does not appreciate the vote; neither does every man. As it has been aptly said: “I ain’t denyin’ the women are foolish; the Almighty made them to match the men.”

But long before this women’s minds were exercised concerning the women’s franchise. Seventy years ago Anne Knight published the first pamphlet on this subject in England.

It was Mrs Muller, the wife of Dr. Muller, Provincial Secretary of Nelson, who initiated the movement for women’s suffrage in New Zealand by writing letters advocating it in the public newspapers. This was as far back as 1869, and this lady also issued; “An Appeal to the Men of New Zealand.” Thinkers like Sir John Hall, Mr Alfred Saunders, Sir William Fox, Dr. James Wallis and many others had their minds stirred by these appeals. Little seemed to come of it. But, nearly a quarter of a century later, Mary Muller, in the calm sunset of a noble life, knew that the men of New Zealand had listened. 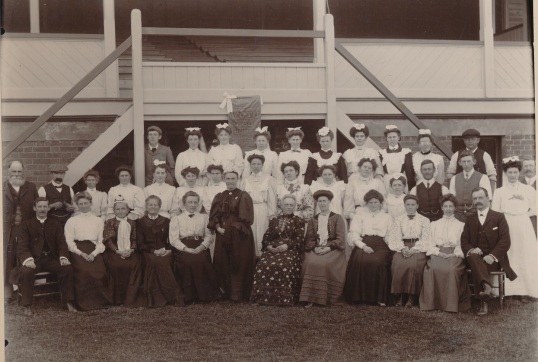 It was Dr. James Wallis who first raised the suffrage banner, in 1878. In 1879, Sir John Hall being Premier, Dr. Wallis returned to the charge, winning Mr. John Ballance; and so it went on through successive sessions, being brought forward only to be thrown aside.

But in 1885 a new force came to New Zealand. Mrs Mary Leavitt, one of the world’s missionaries of the Women’s Christian Temperance Union, came to start that wonderful organisation in our country. February 1886, saw the New Zealand W.C.T.U. formally established, with branches throughout the colony. In this organisation the franchise movement took a prominent position. In 1887 Mrs W. K. Sheppard was appointed Franchise Superintendent, an exceptionally happy choice. This lady was ideally fitted for the work, gifted with a charming, winsome personality, fine mental gifts, and singleness of purpose. To her of all women is the honour of victory. For seven years she toiled. The objections to be overcome were many and varied. Women, it was urged, did not want the franchise, and were quite content to let things be as they were. Some believed that women would be degraded if they took part in elections.

Now, this is how we won the franchise- by educating and organising the people and by sending petitions to Parliament. The first in 1888, was a very short one, reading thus; “That when the Electoral Bill came before the House, it should be so worded as to include women.” This was signed by the New Zealand officers of the W.C.T.U. When nothing came of this effort, Mrs Sheppard organised her forces throughout the colony, prepared a monster petition to be signed by every woman over twenty-one years, who wished so to do. Ten thousand signatures were secured, but again the motion was lost. In 1891, undaunted by the successful hostility of the Legislative Council, the franchise department of the W.C.T.U. redoubled its efforts and in 1892 our women worked harder than before, securing twenty thousand, two hundred and seventy-four signatures.

In Parliament the question was the most absorbing of the session. The House met on June 23rd. Sir John Hall had prepared a Bill, but finding that Mr Balance had included Women’s Suffrage in the Electoral Bill, it was decided that it would be better to support the Government measure. After many discussions and much opposition, largely through the illness of Mr Ballance and the hostility of Mr Seddon, the motion was again lost and all hope of the enfranchisement of women during that session.

But Mrs Sheppard lost no time in vain regrets. Sure of a majority in the Lower House, every effort was devoted to create a public opinion strong enough to storm the stronghold of the opponents in the Legislative Council. A fresh petition was drawn up and circulated. Leaflets were printed and distributed. Large and enthusiastic meetings were held in the principal towns. When petitions came in they contained 31,372 women’s signatures. Nearly one-third of the womanhood of the colony, the largest petition that had ever been presented to any Parliament in Australasia. After a stormy passage the Bill was passed by both Houses, and on September 19th, 1893, Mr Seddon, the Premier, forwarded to Mrs Sheppard the following telegram: “The Electoral Bill assented to by his Excellency the Governor at a quarter to twelve this day,” and the enfranchisement of every adult woman of New Zealand was at last accomplished.

Thoughtless people have been heard to say; “Women have done very little with the vote.” If those words mean, there is no separate women’s party, they are happily and absolutely true. There is no women’s faction here, as in the Homeland. Our social unit is the family, and humanity is our party. We have gained directly and indirectly 33 Acts of especial benefit to women and children, namely:- The Closing of Hotels on Polling Day; Infants’ Life Protection Act; The Widows’ Pension Act (widow with children); The Summary Separation Act; Scientific Temperance Instruction in Schools; Alcoholic Liquor not to be Sold to Persons under 21 Years; Sale and Smoking of Cigarettes under the age of 15; Repeal of C.D. Acts; The Testator’s Family Maintenance Act; Old Age Pensions (as a right, not a charity); Workers’ Homes; District Nurses; Maternity Homes; Shop Assistants Act; and many others. We are working for equal or co-guardianship of children. Women who have good husbands have not yet awakened to the injustice to motherhood, and to marriage, which the law is as it now stands. Our law does not recognise the equality or co-guardianship of the children of the married father and mother, the father still having full control. The economic status and the mothers’ rights of guardianship mist be defined; equal pay for equal work; equality of sentence for equality of crime, irrespective of sex.

One can only say a very little as to the power women hold in the use of the vote; it is a sacred trust for the betterment of our homes and our country, and to make the world a brighter, cleaner place for the children that God has intrusted to our care. Be self-respecting and proud of your womanhood; use your vote for the benefit of your homes and children; and remember the words of King George: “The foundation of national glory is in the homes of the people. It can only remain unshaken while the family life of the nation is strong, and simple, and pure.”