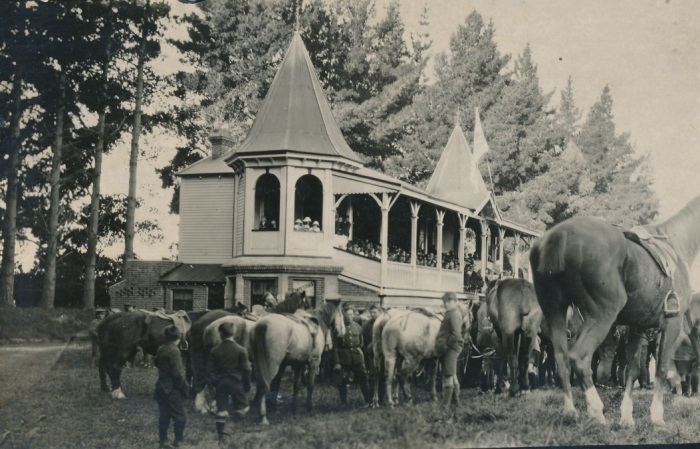 On Sunday April 25, 1915, Allied troops landed at various points on the Gallipoli peninsula. The ANZACs put ashore at Ari Burnu (now Anzac Cove) and their struggle over the next few days to establish and hold a viable beachhead became the stuff of legends.

For the first time, New Zealand troops were involved in a major conflict. There was immense cost in human terms and desolation for many families back home.

One year on from that fateful day, there was the matter of appropriate recognition of the approaching anniversary.

In Wellington, The Dominion newspaper argued, “It is pre-eminently a matter in which the Government should give the country a lead … to adequately appreciate the greatness of the day and its significance.”

The New Zealand government at first took no action. Throughout February and March of 1916, returned services groups kept the matter alive, with approaches to larger municipal councils. Some councils also approached government.

Faced with confusion and little time to spare, Prime Minister William Massey announced early in April that the government would observe a half-day holiday from 1:00pm and he would “be glad if the Mayors of all cities and boroughs” and all district County chairmen would “similarly observe the day.”

Massey considered special services of public worship by all denominations at ‘convenient hours’ would be especially fitting and sports or similar forms of entertainment should not be held. Rather, the occasion would be ideal for evening patriotic meetings to assist the ongoing recruitment campaign.

Ashburton’s Borough Council considered Massey’s statement at its meeting on April 10, 1915. They opted for a united service, to be held in the afternoon and invited citizens to observe a half-holiday.

Newspaper advertisements gave a little more detail. A ‘United Religious Service and Patriotic Meeting’ would be held at the pavilion in the Domain. Returned Troopers were cordially invited to participate in uniform, and citizens were asked to fly flags from the side lines.

With the half-holiday large numbers came in from country districts and local residents streamed to the Domain well in advance of proceedings. Some 2000 people attended, crowding out the pavilion and surrounding the enclosure reserved for the parade.

Ashburton’s first Anzac Day parade set off from the Drillshed in Burnett Street. Already the departure point of the many farewell parades for men drafted as reinforcements, the Drillshed now saw yet another procession.

The Citizens Defence Corps and Salvation Army bands, both with their own ranks reduced by the war, added another engagement to their many patriotic duties. They led the Ashburton territorials of the 8th (South Canterbury) Mounted Rifles, Cadets and Boy Scouts, veterans (including men from the Boer war) and returned soldiers.

Attention probably centred on the recently returned soldiers, but unfortunately their numbers are unknown. From mid-1915 shiploads of the wounded and sick had begun to reach New Zealand. Ashburton had welcomed its latest returning soldiers just ten days prior.

At the Domain, proceedings got underway. Local dignitaries spoke, followed by a brief religious service, shared among Ashburton’s ministers.

Finally, the principal speech, which the Ashburton Guardian described as “stirring”, was given by William Fraser, Minister of Public Works.

Fraser stressed a wider interpretation of “Anzac” beyond commemoration of the landing to the consequences of the entire campaign and the continuing war. He argued the responsibility of the state to look after families of fallen soldiers and give proper care to those who returned wounded.

Fraser also touched on recruiting. He reminded those who had not volunteered that “to do so was of the utmost importance.” His words were cheered. 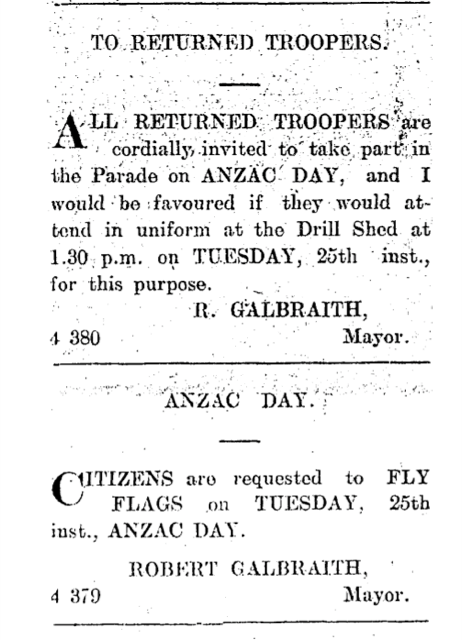 With remarkable timing, another 80 men departed in two drafts either side in this anniversary.

After the National Anthem was sung, the parade reformed and marched back to the Drillshed and the crowd departed. Ashburton’s first Anzac Day commemoration was at an end.

Anzac Day is still the most important date in our calendar of military commemorations and the only day in both New Zealand and Australia to become a public holiday. Since this first Anzac Parade, more than a hundred commemorations have followed. Lest We Forget.