I was working on a series of clipping files pertaining to local businesses. Amidst the modern articles about openings and closures, I came across an envelope with photocopied photographs of the Bank of Australasia – a building which still stands on the corner of East and Tancred Streets.

I was especially interested a series of sepia images, one of which had a gentleman sitting on a safe in the middle of the street. The note on the back of the image suggested this was taken about 1911 and may have been when the building was remodelled. I needed to investigate. The original building was opened in 1881 and was on the same site. It was a small, single storeyed wooden structure. In January 1910 the Ashburton Guardian stated that the bank had decided to erect a new building with an adjoining manager’s residence.  Tenders were called and Christchurch firm W Greig and Son won the contract.

The Guardian promised locals that ‘the building which will be one of the most handsome in the town is to be a two storeyed brick structure with a [red] tiled roof and will be erected on the site occupied by the present premises.’ It was estimated that it would cost in the neighbourhood of £2000.

Although the contractors were from out of town the bricks would be made locally and the timber came from local mills – the ornamental facings, however, would be Oamaru stone. I was unable to find out when exactly the new building opened but it appears to be sometime around July 1912.

But what of the story surrounding the photos that captured my attention? Obviously, if the new building was taking over the site, the old building had to be removed. In September 1911 Friedlander brothers were advertising a sale of the site’s buildings.  The bank was not mentioned though it seems that it was still operating at this time. On offer were two cottages, a stable, lavatory and coal shed, coach house, two large gates, a tank stand, windmill pump and piping, two 800 gallon tanks, and 75 feet of fancy wire fencing.

There is no mention of the results of the sale but Thomas Undrill, a local businessman, asked the Council if he could place a section of the bank building on part of a reserve, which he wanted to leased. The Council said that as the building was very old they would only agree to consider the request after ‘an expert’ had looked at the building. Although, as I said, I can’t find a date when the new bank opened, on July 13, 1912, the old bank itself was up for sale. It is clear that these photos date from that period.

It looks as if the building was removed to another location, judging by the rails and the fact that the building is still intact, rather than simply a pile of debris. I would be very interested in finding out what happened to the building. As for Mr Soal who is guarding the safe it seems that for a time. George Soal worked as a clerk for the Bank, so perhaps they were moving it to the new building rather than selling it as well.

It is easy to think that the new building was required as the old building had outlived its usefulness, and certainly looking at the images it seems to show a sad, old structure.  However, while looking for information for this article I located another photograph, dated 1900, showing the building looking quite sturdy, with what we assume is the manager’s cottage next door. Perhaps the Bank decided that progress demanded a bigger, more impressive edifice.

The same collection that had the sepia images also had one of the new building, dated 1948 – it does indeed look ‘handsome’ and located at the intersection of two of the busiest streets in town, it certainly made its presence felt.

Such finds as these make working with Ashburton Museum’s archive collection never boring and always full of chance finds and surprises. 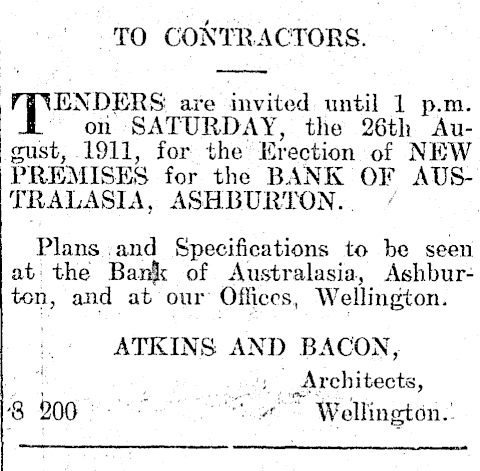