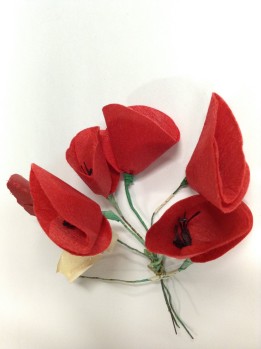 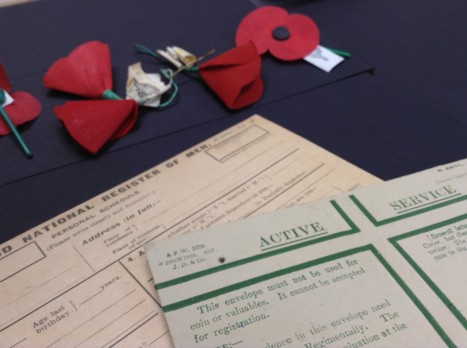 From red poppies seen flowering on the battlefields of Belgium, France and Gallipoli during the spring of 1915, to their use today, the red poppy is a poignant reminder of wartime loss.

The red poppy is a symbol of remembrance that reminds us of service and sacrifice during war. Yet while the poppy is recognised around the world, in many countries the poppy is worn near Armistice Day on 11 November, rather than Anzac Day in April. In Australia for example, people usually wear a sprig of rosemary as a sign of remembrance during April, and wear a poppy in November. Why the difference?

The answer is simple and practical, yet also became the beginning of a tradition that stays with us today.

In 1921, the New Zealand Returned Soldiers’ Association (today known as the Returned Services Association) planned to follow the lead of other countries, and hold its first Poppy Appeal for Armistice Day. 350,000 small poppies, and 16,000 large silk poppies were ordered from France. As happened recently, New Zealand’s first red poppies were made offshore.

These early poppies began as a fundraising project, led by Frenchwoman Madame Anna E. Guérin. Madame Guérin was founder of the American and French Childrens’ League. She thought the manufacture and sale of red poppies would benefit orphans affected by war. She organised teams of French women, children and war veterans, to make the artificial poppies from cloth. Proceeds from their sale would provide much needed funds for the Children’s League.

Red poppies had earlier been used as a symbol of war remembrance in the United States of America. There, another woman, Moina Michael, had worked hard to ensure the red poppy be adopted as a national symbol of remembrance. From France, Madame Guérin was keen to promote the idea to the Allied nations Australia, Britain, Canada and New Zealand. It was her representative, Colonel Alfred Moffatt, who suggested the idea to the New Zealand Returned Soldiers’ Association in September 1921.

The poppies were soon made and ordered, and the first Poppy Day Appeal was planned for November 1921.

But all did not go to plan. The ship carrying the poppies from France to New Zealand arrived too late for the Appeal to be properly publicised. There would be no Red Poppy Appeal before Armistice Day that year. A decision was made to hold over the red poppies until Anzac Day the following year, April 1922. This began the tradition we know today.

That first Poppy Day Appeal in 1922 was a huge success. Many sellers sold out early in the day. Over £13,000 was raised. A proportion of this was returned to the French and American Childrens’ League. The remainder was used by the New Zealand Returned Soldiers’ Association to aid the welfare of returned soldiers in New Zealand. By 1945, 750,000 red poppies were sent across New Zealand each year. This equals one in two people wearing a red poppy.

Today, the Christchurch RSA is responsible for the manufacture of red poppies. They are now made of paper rather than cloth. They remain a powerful reminder and symbol of remembrance.